A termite’s a termite, right? We wish it were that simple. There are actually a lot of differences between termite types and termite species. If you get drywood termites in your home, they are going to present a different problem than subterranean termites. And they are going to require a different strategy for treatment. Here are a few things you should know.

You already know quite a bit about this termite by looking at its name. These termites prefer drywood. That means they’re going to feed on your window sills, door frames, and other hardwood building materials. They’re also going to feed on furniture. If you have antiques or furniture keepsakes that are made of wood, these termites could ruin your day.

Each year, termites cost U.S. property owners billions of dollars, but only a fraction of that is drywood termite damage. Estimates for drywood termite damage is in the hundreds of millions. One big reason for this is drywood termites are not nearly as stealthy as subterranean termites. As they feed on wood, they push their feces out kick-out holes. Though these tiny droppings are often mistaken for sawdust, sand, or some kind of pellet, they are hard to miss. And the appearance of these hard droppings is enough to alert a property owner to the danger.

These termites are also called ground termites. As you can probably guess, they come up from the ground to feed on a home. They prefer soft or decaying wood, but have no problem moving into sound, hard timbers. When they do, they can literally total a man-made structure. Formosan and Asian termites are both subterranean termites. You’ve probably heard of them. Of all the subterranean termites in the world, these two are the most destructive. One reason they do more damage is that they both are able to establish nests in the walls of a building. This gives the worker termites less distance to travel to acquire food.

How are drywood vs. subterranean termites’ wings different?

Winged termites are called alates. Subterranean alates have one single thick, dark vein that runs parallel to the top of the wing. Drywood termites have a complex system of veins, usually at least three or four in each wing. Most termites shed their wings within minutes of landing. This is often the only evidence they leave behind.

Are there any differences in their nesting habits?

An important difference between the two is that subterranean termites nest in the ground, while drywood termites nest inside the wood they are infesting. This leads to varying points of attack on your property. Subterranean termites make mud tubes to tunnel through the ground and invade your home. These tubes protect them from predators and dehydration. Drywood termites don’t dig mud tubes, needing zero contact with soil. They infest your home by air and require less moisture (which is why they don’t need soil or the mud tubes).

Drywood termites tend to be larger, producing worker caste members with creamy-white bodies throughout. Drywood termite soldier caste members maintain the milky body color but have larger bodies and darker heads which look almost scorched. The drywood termites with wings, however–otherwise known as swarmer termites–will have a series of complex veins running along the topside of the wing which is a surefire way to tell which type of termite you’ve got on your hands (that is, if you can see that close).

Subterranean winged termites, however, have just one vein which runs along the top line of the wing instead of the series of veins characterized by the drywood termites. Additionally, the bodies of the subterranean termite soldier and worker caste members are smaller than that of their drywood cousins. 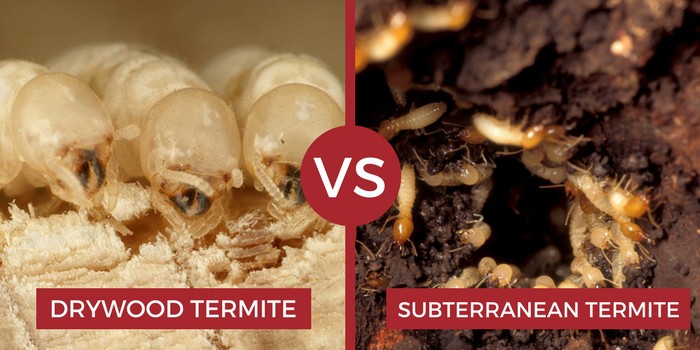 Termites, both drywood and subterranean, differ from ants in the following ways:

The common sign of a drywood termite infestation is the appearance of frass.

Frass is termite waste or fecal matter. Unlike subterranean termites, which build nests and tunnels for foraging out of fecal matter, drywood termites have no use for it as they only excavate tunnels in wood. They get rid of their feces by making a small hole in the wood and pushing it out of their home.

A clear sign of a drywood termite infestation is the collection of frass on the floor or flat surface below the wood they are inhabiting. Termite frass often looks like sawdust from afar, but on closer inspection, you will be able to notice granular pellets, often varying in colour.